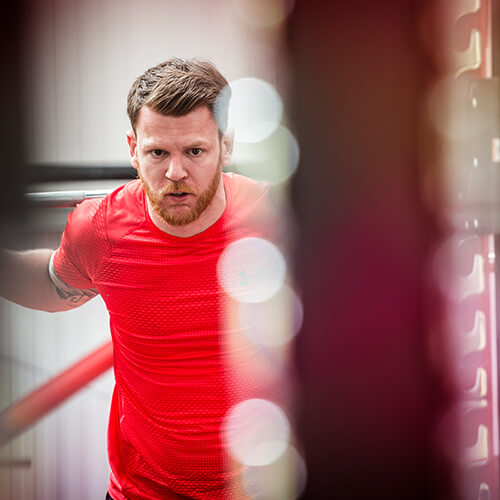 For this workout you can use dumbbells(DB), kettlebells(KB) or even bands.

Complete exercise A followed by B exercise with little to no rest between the superset. Complete 4 sets of each of the superset resting 90 seconds between each pair.

“What is a Superset

The easiest way to define a superset is: Two exercises combined into one full set, with none to little programmed rest in-between.

A superset can take multiple forms and can be left open for the imagination when it comes to combining different movements. In the above workout for example we are pairing an upper body movement with a lower body movement. This creates a full body workout that cuts down your time spent working out while also improving muscular endurance.

Science has suggested supersets to be useful for multiple reasons. While that’s not always the case, and some research has shown conflicting evidence, but there is promise and usefulness to this style training.

First, supersets may provide a metabolic benefit. Ten recreationally active men had their energy expenditure (aka energy used, or calories burned) compared when following a superset and traditional styled resistance workout. Each subject performed similar workouts with 70% of their 1-RMs on movements, but the difference was the exercise order (supersets and single sets).

Another benefit of supersets could be a slight benefit in power output. In 2005, researchers compared 24 college leveled rugby players in two settings. One group performed a traditional bench press throw with no training intervention, while the other group performed a set, then did a set of bench pulls to hit antagonistic muscles.

They found that the superset group performing the agonist – antagonist training had a slight increase in acute power. The superset group’s power increased roughly 4.7% after their sets compared to the control group. These methods are similar to contrast training, but focused on using a relatable muscle pairing to seek power benefits (push/pull).

When it comes to hypertrophy and strength, superset research is still lacking. A review from 2010 on agonist – antagonist training suggested the need for more EMG and hypertrophy based research. There’s been evidence suggesting benefit of supersets to metabolic and power advantages, but very little on muscular hypertrophy, so take that knowledge with a grain of salt.

Yet, a lot of coaches and athletes utilize this training method to facilitate muscle growth, and with an acute increase in power, then hypertrophy could possibly come as a byproduct of a superset.”

Ryan has worked with elite teams and athletes ranging from a wide range of sports and backgrounds such as Warrington Wolves in Rugby League as an First Team S&C coach moving then to Rugby Union as Head of Strength & Conditioning then more recently High Performance Manager for Georgia rugby union. Ryan has also consulted with many of the world’s leading rugby union 7’s and XV a side squads as well as rugby league teams domestically and from around the world.
He has also developed other professional and amateur athletes ranging from boxing to hockey from Amateur to Commonwealth and Olympic Athletes and been mentored and interned with some of the world’s leading coaches in human physical performance. He brings with him a BSc (Hons) Strength and Conditioning degree and an impressive over sixteen years hands-on experience.
He holds the world-renowned Westside Barbell Certification, a leading concept in Elite powerlifting, NFL and contemporary world class sport, with a showcase of accreditations in fitness, nutrition and strength and conditioning from – and not limited to – UKSCA, NSCA, CPPS (Joe Defranco & Jim Smith) BioForce (Joel Jameson) NASM and Precision Nutrition.